In their paper “Do Private Equity Funds Manipulate Reported Returns?”, Brown, Gredil, and Kaplan (2016) examined if General Partners distorted valuations that are commonly being used by investors to decide on commitments to subsequent funds managed by the same firm/general partner.

Top-performing mature funds tend to continue very strong performance in the last few years of their life; bad funds will do the opposite.

Their analysis found evidence that under-performing managers tend to boost reported returns during times when fundraising takes place. On the other hand, they discovered that top-performing funds were likely to understate their valuations.

We look at the relevance of these findings for the secondary market.

Most LPs accept that the valuation of illiquid assets, e.g., private companies, is an imperfect exercise. Yes, the fair value accounting standards might have been amended over the past few years, but valuations still seem to exhibit time lags. We believe this has important implications for LPs considering selling fund interests in the secondary market.

Most publications are written for buyers of private equity secondaries

Historically, most publications on the private equity secondary market focused on the J-curve mitigation effect, the ability to buy fund interests at a discount, and superior selection skills to explain the higher internal rates of return (IRR) of secondary funds vs. primary funds. Most of these publications were prepared by secondary buyers and, in our view, omitted a critical factor for potential sellers: top-performing mature funds tend to continue their very strong performance in the last few years of their life; bad funds will do the opposite.

Most primary investors anchor on their investments’ book value when they approach the secondary market.

Most primary investors approach the secondary market from an accountant’s perspective, anchoring on their investments’ book value, represented by the net asset value (NAV).

They would rather sell a great fund at NAV or a small premium than to accept a material discount on a bottom-quartile fund whose GP has likely overstated the valuation. In our view, that is what secondary buyers capitalize on and explains a big part of their outperformance. Secondary buyers know that they “can’t eat the NAV” and rather must care about expected future cash flows.

You can’t eat the Net Asset Value. It makes much more sense to focus on expected future cash flows.

While there are endless ways of slicing and dicing the datasets, we think it is particularly relevant to analyze the results across different performance quartiles. As reported performance figures of early-stage funds are less reliable, our analysis focuses on more mature funds.

The below charts first show the average results of a top-quartile mature private market fund (vintages 2010 and 2011, i.e., 8 to 9 years old). The 25% of funds with the highest IRRs already distributed 1.48x of paid-in capital to investors by today (DPI). What’s left represents 0.73x of paid-in capital (RVPI), resulting in a TVPI of 2.21x. 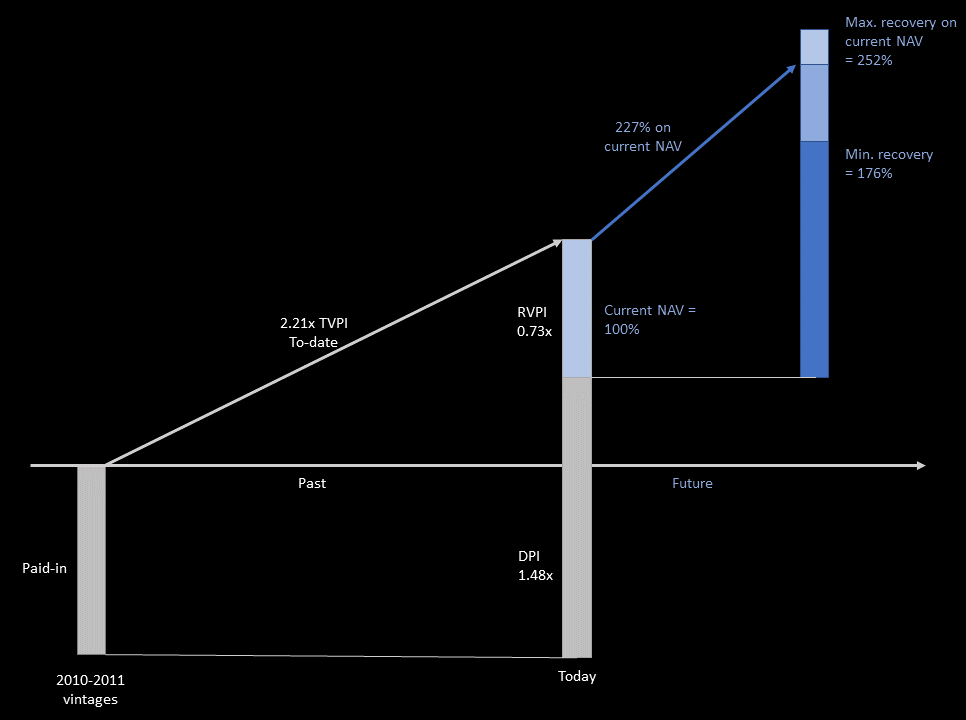 The results for the bottom 25% of funds are (obviously) much more disappointing; DPI of 0.66x and TVPI of 1.11x. These numbers are all about the past.

Let us now think about LPs’ options on the secondary market using a forward-looking perspective.

What one should most care about is how much of that value one’s funds will actually distribute in the future.

The residual value in a fund today is the NAV, and what we should most care about is how much of that value a fund will actually distribute in the future. We, therefore, measure the recovery over their remaining life in % of the NAV in year 8 to 9.

A top-performing fund has historically returned 221% of NAV/residual value that it reported in year 8 or 9 (see chart 1 above). The bottom-quartile funds recovered a mere 60% of NAV (see chart 2 above).

Let us summarize the results about future recovery expectations across all quartiles. 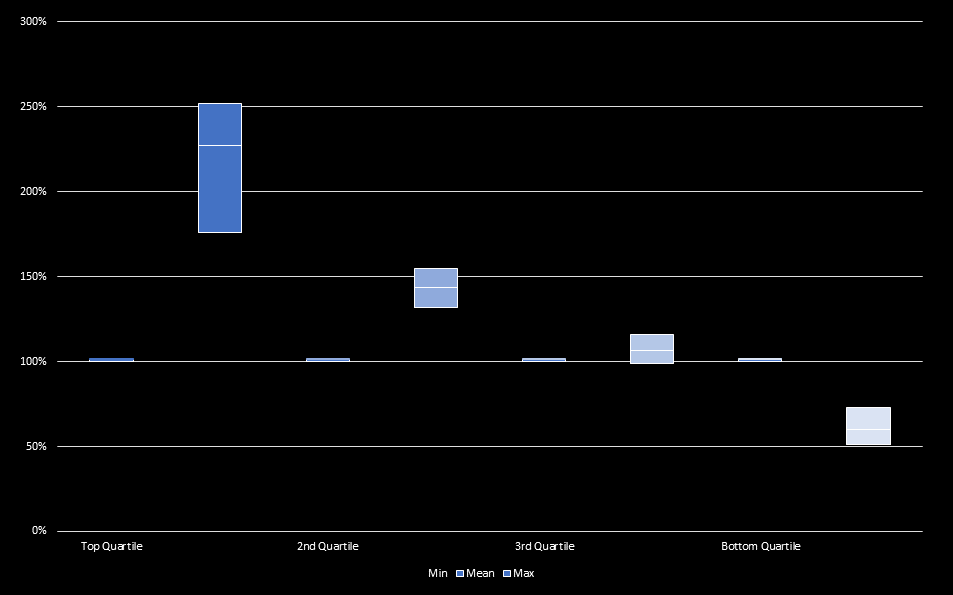 As counterintuitive as it sounds, a seller would often have been better off getting rid of the worst performers than holding on to the top funds.

Would you like to receive a quick indicative pricing for your asset? Or share your views on this article? Please write to Andres today at ah@mpag.com, or call him at +41 44 500 4555.